(OC Media) Once a month and like clockwork, 29-year-old Guram used to take the Kutaisi-Batumi train to visit his sister and her family in Ureki, 60 kilometres north of Batumi along the black sea coast.

His journey always started in his hometown of Rioni, south of Kutaisi, which doubles as a bustling train station connecting routes throughout Georgia.

He travels on the ‘elektrichka’, a class of suburban train in much of the post-Soviet world that make frequent stops connecting villages and towns as well as major cities.

Guram doesn’t mind how crowded the train is: at ₾2 ($0.70) and with a convenient schedule, the Kutaisi-Batumi elektrichka is one of the most efficient routes he could use, especially as buses or minibuses cost more than ₾15 ($5).

‘I remember the train being so full, people standing, there was barely enough space to breathe’, Guram recalls of the tangerine season, as farmers packed in to bring their produce to market.

‘One time, I pulled those doors open for one stop for us to breathe’, he says, adding that he got in trouble for that.

Aside from the low-cost elektrichkas, there are regional and long-distance lines. The elektrichkas are the slowest of the three, not only because of their age, but because they stop at every settlement with a platform along their path.

Elektrichkas stop in every village with a platform, some of them in the middle of nowhere, but there is almost always someone boarding or leaving the train. Photo: Mariam Nikuradze/OC Media. 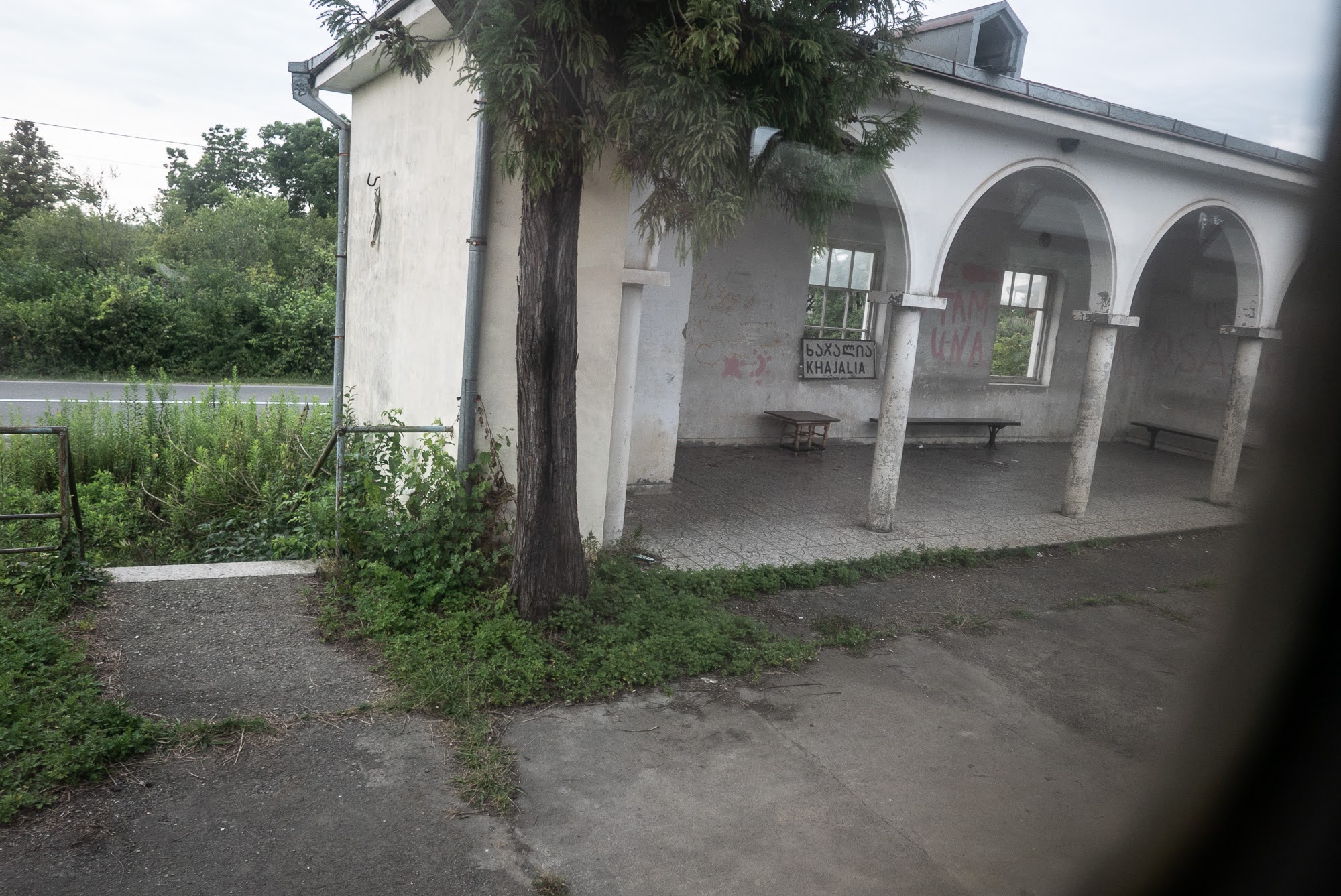 In the 2000s, a new class of ‘modernised’ trains was introduced on many of the regional lines.

The elektrichkas must also make stops to allow their faster counterparts pass,  taking enough time for passengers to hop off and smoke at least one cigarette.

Where the trains stop for more than a minute, groups of dogs gather, waiting for the trains to stop, as they know they may get food. Some of the train staff stock up on bread in advance, knowing that they will meet hungry stray dogs on their way.

Before the authorities halted all public transport during the COVID-19 pandemic, there were 15 elektrichka lines serving towns and villages across the country.

Since the restrictions were lifted, however, Georgian Railway has quietly declined to resume most of the routes; only five now operate.

The company, which is state-owned, claims to serve the ‘social interests’ of the population.

By the company’s own admission, the elektrichka lines that are now disappearing, with their ticket prices from ₾0.50– ₾2 ($0.17–$0.69), ‘typically serve the low-income sections of society’.

Yet in recent years, they have focused more on newer trains, such the company’s golden child: the Tbilisi-Batumi-Tbilisi line and its modern Stadler trains. In late July, they increased the ticket prices for economy travel on that route from ₾25 ($9) to ₾34 ($12), citing the rising costs of electricity, maintenance, and materials.

Passenger transport has also proved unprofitable for Georgian Railway in general, generating only around 2% of revenue in 2020 and operating at a loss.

Company director Davit Peradze said in May that Georgian Railway spends about ₾62 million ($21 million) annually subsidising passenger lines, a shortfall the company makes up through its profitable freight transport.

While in 2018, the government agreed to step up and take over subsidising passenger transport, the agreement has yet to amount to anything. In May, the government announced this would not begin until 2024.

In the absence of other reliable and affordable methods of transport, the remaining elektrichkas are one of the most used lines by many low-income families, many of whom rely on them to move produce to urban centres.

Ramazi, who owns a farm in a small village in the Kharagauli Municipality, uses the elektrichka connecting Zestaponi and Khashuri for ₾0.50 ($0.17).

‘With the increased oil prices, I can’t use the car very often and prefer to take the train, even when I have many bags’, he says.

Standing at the end of the carriage guarding his bags, Ramazi says only locals take this train, and that passengers know each other. There are a lot of children aboard.

He has to walk 20 more minutes from the station to his home, but even with the heavy bags, this option still seems convenient for now.

‘Maybe one day, when they finish the new highway, it will shorten my route. Then I may consider switching from this train to a car if I can save some time and money on fuel.’

Irina Khizanashvili, a spokesperson for Georgian Railway, told OC Media she did not know why most of the elektrichka lines had been abandoned in the wake of the pandemic. While not ruling out the possibility that some may return, she could not say for sure.

One of the most popular elektrichka lines before the pandemic was the Kutaisi-Tbilisi route. Gia, a train driver for more than 30 years, says he was surprised to learn that the route was not coming back.

‘Maybe if people continue asking for it every day, they will bring it back — hopefully’, he says.